The "Flag Shot": Every Athlete and Sponsor's Dream

Bias alert! (I love Track and Field. Competed for years. And I am proud of TORQUE’s relationship with Athletics Canada, as well as several other National Sport Federations in Canada)

Maybe you’ve heard my colleagues or I speak to it, but if you haven’t here it is:

(BTW, when googling the term “the flag shot” the top results showcase something quite different – but for some maybe just as interesting…)

Andre De Grasse – at Pan Ams, Worlds and the Olympic Games.  Same pose following podium finishes. He’s not the first athlete to pose like this, and hopefully he, and other Canadians will replicate several more times for the remainder of Rio and at any other international event for the foreseeable future.

It’s a beautiful thing. With the world watching (estimated 2 billion watched the 2012 London Olympic Games 100M final), Andre De Grasse celebrates the most significant result of his meteoric rise to the upper echelon of the sprint world – a Bronze Medal at the Olympic Games – by draping himself in the maple leaf and then looking for his mom. He’s grateful to his mom and his country.

Canadians all smile even more broadly.

And so does Nike.

Despite Andre De Grasse’s endorsement deal with Puma, which commits him to wear their shoes and appear in a commercial with Usain Bolt – the only consistent apparel manufacturer’s logo in all of his shots is Nike. De Grasse can wear full Puma gear in nearly every race he competes in, except for the three most important events of his career to date – the Pan Am Games, the World Championships and the Olympics.

In those events, he must wear Nike clothing. He can still wear Puma shoes to get to the podium and set PBs – but the logo on his chest will be the swoosh.

And the same goes for all Canadian Track & Field athletes including Brianne Theisen-Eaton, herself a recent bronze medalist in Rio. She is also a proud member of the Flag Shot Club at several other key meets around the globe.

The reason for this: Nike and Athletics Canada are long-term partners. Without getting into too many details, Nike invests in Athletics Canada with training and competition apparel for their athletes as well as cash (and other services), for the right to associate with the national governing body’s brand (and team of athletes).  In return Nike receives traditional and non-traditional sponsorship benefits including their logo on all performance wear the National Team sports in competition.

(Aside – There is great benefit still for Puma in sponsoring De Grasse and other athletes, as there are plenty of product and storylines to be developed around his profile.

It may not sound complex, and it doesn’t have to be, but the apparel deal of a National Sport Federation (NSF) can be incredibly fruitful. Largely because of the following:

The Olympic Games’ sponsor guidelines are the most rigid in all of sport. There are very few IOC sponsor logos visible within the field of play. You may have noticed, that despite being Global Partners, there are no Visa billboards or McDonalds’ field level signage.

The only logos you see are on the athletes themselves. Athletes are allowed to choose their preferred performance gear, whether it’s footwear, eyewear or equipment (i.e. hockey stick or table tennis paddle).

But in almost all cases, the NSF of each nation provides the competition uniform. These relationships between NSF and performance partners can be massively fruitful for both sides. I won’t go too deep into all the potential benefits for a brand, but here is a little taste for sponsorship folks of various ilk.

If that doesn’t crystalize the reasoning behind this argument for you, let’s look at a quick case study.

He cheers for Brianne Theison-Eaton. He follows her preparation for the Games, and sees her in the Visa spots, wearing Team Canada Nike apparel. He likes the unique and fun story about her and her American husband (who happens to be a decathlete for Team USA).

Brianne wins Bronze, due to a valiant effort on the second day of the Heptathlon. Brianne’s husband, Ashton is belittled on social media for wearing an official Team Canada hat while cheering for his wife during competition.

Bart sees this story on twitter, thinks it’s great and also likes the look of the hat and decides to buy one. Partly to make a statement, partly because he wants a new hat.

Bart goes online to Athletics Canada’s website, ends up buying a total of three hats (he is a family of three) and a pair of Team Canada Nikes for his wife.

Bart’s order is confirmed. He receives an email from Athletics Canada thanking him for his purchase and is greeted with the following image. 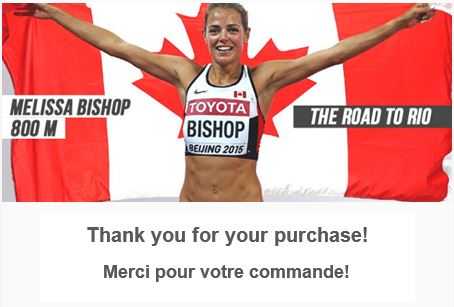 Damn those Flag Shots are everywhere. And I love them. So should performance partners.