#DHLDelivers At the HSBC Canada Sevens

We at TORQUE Strategies have worked with the Canada Sevens team from the initial bid committee until the party hit BC Place stadium in year one and two. However, this year we took on the additional and exciting role of helping another client of ours, DHL, activate its official logistics partnership with the World Rugby Sevens Series.

As the ‘World’s Most International Company,’ DHL Global employs over 80,000 people to service 2.5 million customers annually across 220 countries and territories around the world. The numbers are truly staggering as its committed logistics team utilizes some 33,000 vehicles and 250 dedicated aircraft to move 180 million time-definite shipments annually. DHL Global has long been a partner of both the Rugby World Cup and the HSBC World Rugby Sevens Series, a close partnership founded upon shared core beliefs as Rugby’s reliance on teamwork, passion and an intense desire to win aligns perfectly with DHL’s core brand values.

Our ideation sessions took us down a number of fun, unique and exciting paths, however, ultimately the idea which resonated the most was the DHL Jellybean Jar concept. We all reminisced about being kids again, stressing over what our guess would be in the Jellybean Jar contest and thought recreating this, using an iconic yellow DHL delivery van full of rugby balls would be perfect.

An amazing grand prize pack, however, was still needed to help foster and encourage ballot entries so we set out to find something which would excite the general public and continue resonating with DHL’s core competencies. Since the HSBC Canada Sevens Experience is a long day and nobody wants to miss the action stuck in food and beer lineups, we thought a prize pack including 2 reserved seats, 2 Rugby Canada jerseys, a $400 food and beverage credit, and the kicker, personal butler service to your seat for the weekend, would be a pretty freaking awesome package!

Taking that big a creative concept off the white board and into the real world is always an immense challenge, especially considering the extremely short two-week lead time we had to pull it off. Luckily, we had our brightest TORQUE-ers on the case and we quickly set out to discern how we could overcome our biggest hurdles and bring our DHL Jellybean Truck and In-Stadium Butler Service to life.

I’ll save you the nuanced details but safe to say a heap of work went into: 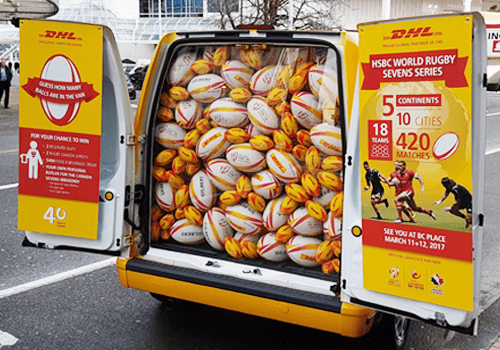 And did I mention we only had 2 weeks to pull this off!

After a few long nights and some sweaty armpits, it was mission launch time. Armed with pumping tunes and DHL ballot boxes, 5 DHL street team ambassadors took to the streets on Thursday and Friday under the #DHLVANcouver banner, soliciting ballot entries from locals and building buzz about DHL’s support of the HSBC Canada Sevens tournament.

Only question remained was who was going to guess the correct number of Gilberts and be our grand prize winner?!

After some semi-tedious ballot counting on Friday evening, we found our lucky winner and set-up a meet time at our DHL activation zone on Terry Fox Plaza. Only issue was our winner had to miss the morning’s Rugby action on account of a root canal appointment! However, once the tooth had been fixed, he and his girlfriend settled into their premium seats for some non-stop Rugby Sevens action, all whilst being serviced by our dynamic DHL butler duo, who went above and beyond to serve – even making an exceptional run off-site to purchase a speciality coffee.

Engagement at Its Best

I know this might sound just a little biased, but this unique and fun in-stadium activation drew a fair number of envious glances from fans in all direction, each anxious to get their hands on the walkie-talkie used for butler communication and ordering. The activation even appeared to go viral after a live shot of our Butler Team on the BC Place jumbotron sent fans out in droves to the DHL Truck on the plaza where we were still taking guesses for a secondary Sunday Butler Service prize!

Overall, it was an incredible couple of weeks for us working with such a unique, international and customer-centric company. There were highlights aplenty, however, the moments that stick out for me include running into an excited Rugby Canada Sevens player, Adam Zaruba, during our street activation and having him cast a ballot himself, watching 2 young UBC engineering students spend 45 minutes trying to use Pythagoras Theorem and the circumference of a Rugby ball to work out the correct number of balls, and finally just the overall excitement from our contest winners and the positive engagement we got from nearby fans. It was truly a memorable prize and a memorable weekend.